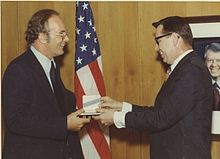 How could a twenty-five-year veteran of the C.I.A. turn so completely against the actions of this respected bureau as to devote three years of his life compiling his memoirs into a book entitled “Deadly Deceits?” 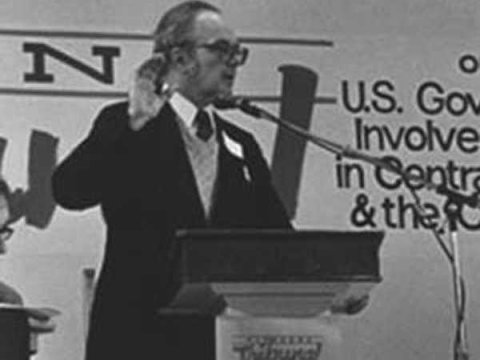 Ralph W. McGehee, author and onetime chief adviser to the head of Vietnamese Special Police – equivalent to our own F.B.I. – explained this and much more on Wednesday at the second of several speaking events arranged in conjunction with Florida’s Central America Information Week.

According to Ralph W. McGehee, his experiences culminating in Vietnam completely changed his once gung-ho attitude to one of disillusionment. For two years, he fought the agency to get the legal right to publish his book; and it was only after an exposé by the Washington Post, that the C.I.A. withdrew its restrictions.

McGehee documented experiences in Thailand, Japan, China, and the Philippines both in his book and in his recent address to the group in attendance at St. Paul’s Catholic Church in Leesburg, Florida. He described an organization that was more interested in justifying its policy stance than in gathering factual information. His claims of illegal and fraudulent activities perpetrated by the C.I.A. in an effort to manipulate the attitudes and people around the world included forging documents and “staging” the discoveries of weapon shipments into El Salvador, Nicaragua, Grenada, and Vietnam.

Taking this position in the public forum has not been easy however. He claims that his phone has been tapped, his mail opened and he is often placed under surveillance by the agency. He brought up the well-known C.I.A. “assassination” manual and the mining of Nicaragua’s harbors as examples of events which became public. But, it is the myriad of experiences that have never been exposed to public scrutiny that he is compelled to reveal in his lectures and publications. 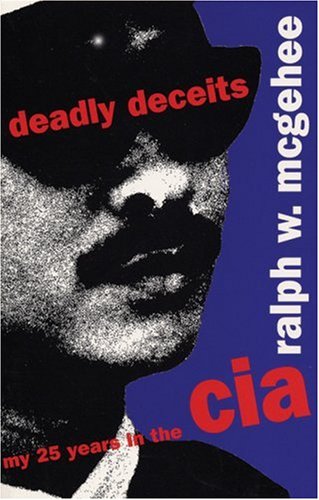 His book, Deadly Deceits chronologically charts the disintegration of his own trust in the C.I.A.. Beginning in 1952, fresh out of college during the McCarthy era and full of idealism as a former Notre Dame football star, he was recruited and trained in all aspects of intelligence gathering, combat, demolition and survival. It wasn’t until ten years later during his assignment in Thailand, that he finally began to doubt the veracity and motives of his agency.

There, he experienced a wide rift between what he witnessed and what the C.I.A. was releasing to the media as fact. He was assigned to work with mountain tribal villagers in developing airstrips in accessible regions, supposedly to assist in the deployment of humanitarian aid to these outlying border areas. He also understood the underlying intention of permitting the rapid deployment of military force, should the need ever arise. He endured tremendous physical hardships and took a great deal of pride in seeing this task accomplished with the joint cooperation of the villagers. His pride turned to bitterness and anger when he later learned that the Thai government had shelled, bombed and napalmed those same villagers with which he had so successfully worked previously. His efforts had laid the groundwork for the destruction of the hill tribes in Thailand.

After 19 years and similar experiences in Vietnam, he wanted out. Because he was in the covert division, his secrecy oath made it impossible to even admit having been employed by the C.I.A.. With a wife and four children to support, the prospect of a resume showing that nineteen years ago, he had played football and graduated magna cum laude and now would like to find a job, seemed ridiculous. He had to endure another year before being eligible for early retirement. He chose to protest from within, but during that year, the rules were changed from 20 to 25 years, and he was faced with another 5 years of service. By this time, he had completely alienated himself within the agency. He was consigned to an office job which would take him out of active field involvement, essentially sitting at an empty desk everyday with nothing to do. It was at this time that he decided to utilize the available resources to complete a study on Asian revolutionary pro-cedures and write his first book, Deadly Deceits.

Perhaps, his entire attitude is best summed up in his own words, starting his speech on Wednesday in saying, “Please don’t believe anything I’m going to tell you. There’s no reason why anyone in the United States should believe anything they see on the nightly news or read in the newspapers because the American people are so subjected to lies, to misinformation, that one more person saying one more thing now means absolutely nothing …if you doubt me, and I hope you do doubt me, please check the record. The process I had to go through to clear my book required that I prove that everything was already in the public domain, in the Senate and House investigations of the C.I.A. and from the Pentagon Papers. If you doubt me, just check the record. I’m not trying to sell you anything. It’s there in the record.”

One of the major conclusions of the Senate Committee Report on the C.I.A. was that one of its primary functions is the creation of an international anti-communist ideology through propaganda operations. According to McGehee, the C.I. A. operates a media organ labelled by the agents themselves as, “The Mighty Wurlitzer.” It links news media and publishing interests around the world. The Agency is not now nor has it ever been an “intelligence” agency. It is the action arm of the President’s foreign policy. In that context, it supports or overthrows foreign governments. McGehee stated that during his tenure, the Agency was using over 350 prominent American media figures to plant information they wanted out and to suppress information they wanted to withhold. By 1976, the Agency had been responsible for publishing 1,250 books under the guise of private authorship.

When asked about the underlying reasons for our covert activities in the Third World, McGehee explained that multi-national corporate interests are packing up operations here in America where workers are paid 10 to 15 dollars an hour and moving entire facilities into areas of the world where labor costs are much lower. He claims the real issue at stake in Central America is access to and control of a pool of cheap labor. The proposed $100,000,000 in Contra aid will only open a floodgate of further expenditures and troop commitments in the region.

Note: This article, written by Stephen Kastner, was originally published in 1986 in the Leesburg Commercial, a Florida newspaper owned by the New York Times news syndicate.