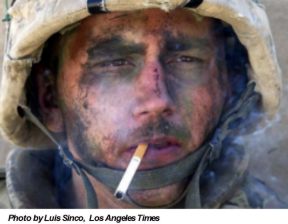 His family is still missing Blake Miller – the Miller who left Kentucky for Iraq a couple of years ago. The man who left was easygoing, quick to laugh, happy to sit in a relative’s house and eat and smoke and talk. The man who came back is quick to anger, they say, and is quiet. He still smiles often but does not easily laugh.

And when he takes a seat in his adoptive grandmother’s home, amid her collection of ceramic Christ figurines, it is in a chair that faces the door.

Mildred Childers, who owns those figurines, sees Miller’s difficulties as a crisis of faith. She still remembers Miller’s call just before the assault on Fallujah, and his terrible question: “How can people go to church and be a Christian and kill people in Iraq?”

“He was raised where that’s one of the Ten Commandments, do not kill,” she said. “I think it’s hard for a soldier to go to war and have that embedded in them from small children up, and you go over there and you’ve got to do it to stay alive.”

Recently, some of his Marine buddies have been calling Miller up, crying drunk, and remembering their war experiences. Just like Papaw Joe Lee used to do when Miller was a boy.

“There’s a lot of Vietnam vets … they don’t heal until 30, 40 years down the road,” Miller said. “People bottle it up, become angry, easily temperamental, and hell, before you know it, these are the people who are snapping on you.”

She recalled her own first glimpse of the Marlboro Man — an image seen through tears of relief that he was alive, and misery at how worn he looked.

…from THE WAR WITHIN by Matthew B. Stannard, SF Chronicle Staff Writer