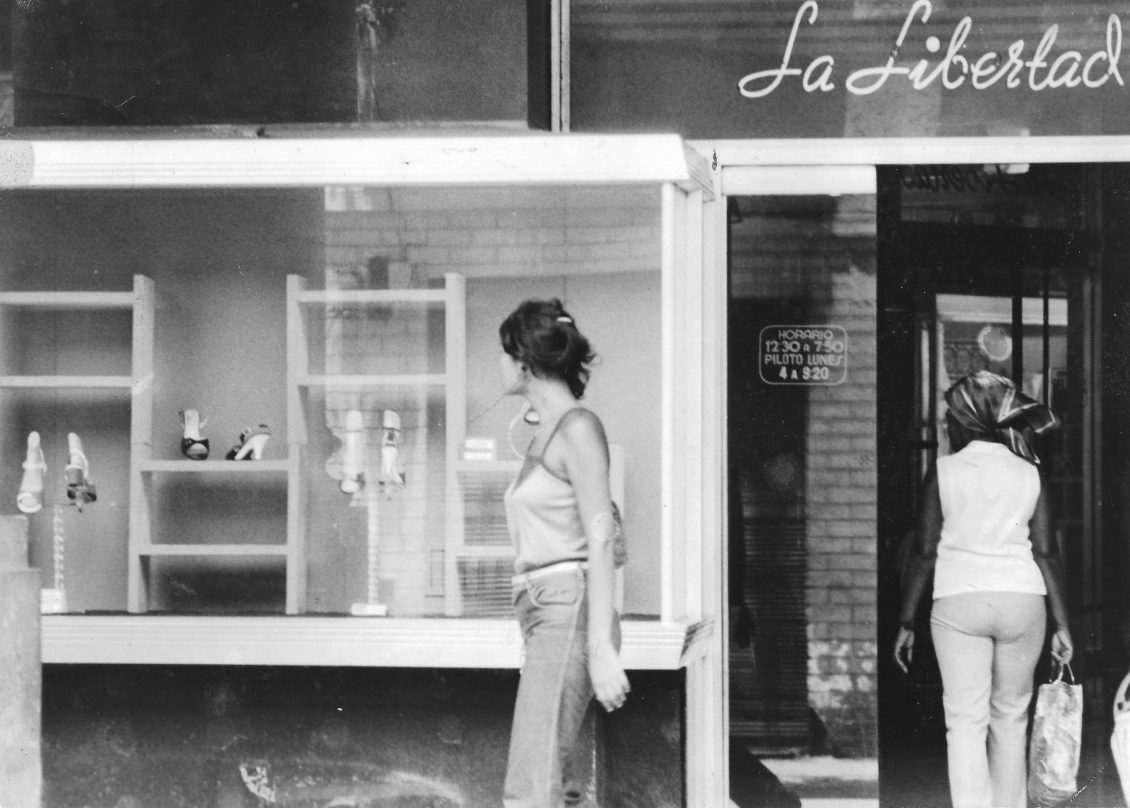 Day One started out with a distinct lack of awareness that almost proved fatal.

The pollution woke me up. My room, thirteen stories above the Malecon, a shoreline highway much like Chicago’s Outer Drive, seemed full of the smells of early morning traffic from the streets below. My head ached and my eyes were sore. At 9:30 a.m. it was already too hot and noisy for any further attempts at sleeping.

Aside from the discomfort, it was curiosity that provided me with the missing motivation to get up. I would learn to shut the balcony door at night, turning on the air-conditioner to clear the air. Tomorrow, white noise from the machine would quiet the traffic. Looking out over the city with a headache and a telescope-like camera lens renewed my sense of melodrama. Fantasies of espionage and paranoia were mingled with that watching-me, watching-you, curiosity – especially when looking down on a police checkpoint set up in the street below.

People were being pulled over in seemingly random fashion for an examination of various documents that each seemed ready to produce. All was calm and orderly – a far cry from the scene at the cab stand after breakfast.

Most Cubans seem to accept the idea of waiting in slow-moving lines for almost anything they want. However, at the taxi stand, a particularly aggressive and impatient man made a bid for immediate access to the next taxi refusing to wait in the line. Somehow amidst shouting and violent fist shaking, he succeeded in intimidating the old man acting as cab marshal.

I saw people standing in a line to buy a ticket to stand in another line to get an ice cream cone and the lines were long.

Everything here seems to take place at a certain preordained rate. After waiting in a line to enter a restaurant, you can usually expect to wait for another 15 to 30 minutes for a waiter to take your order. Fortunately, the custom of tipping is no longer considered ethical since the revolution. Patience is the watchword. I was content to observe the people while I waited. My father would lose his mind here.

In the days to follow, aside from the incident at the cab stand, I never saw another example of someone being unable to tolerate a delay. This was part of my first exposure to a strangely depressed economy in which people seem to be content with finding anything at all to buy in the stores. Selection, clever displays and advertising have little importance here.

If a store has any sign out on the street it is usually just a weather-beaten relic from a bygone era. Department stores that were previously multi-level have cut back retail space to the ground floor. Escalators to the empty upper floors sit idle and blockaded, shelves are bleak, display cases are nearly bare. There were few hard goods for sale in the busy shopping district I visited in Habana Vieja today.

Bookstores seem to be the only exception to this trend. Stocked full of titles on subjects concerning everything from diesel mechanics to stamp collecting, they are the oasis in this consumer desert. While the books are written in Spanish, many are published and printed in the Soviet Union or other Eastern bloc countries. And the prices are incredible. Here in The Vietnam Alliance Bookstore, a large hardbound book of color plates illustrating Russian paintings that would easily have sold for $60 in the U.S., was less than $10.
Almost everything is reasonably priced in Havana. If time is money, as they say on Wall Street, then you pay the difference standing in lines to enter the more popular stores or to purchase a specific item that is in demand. The official exchange rate is $1.22 to the Cuban peso or about 82 centavos to the dollar. On the street, “cambio” rates are whispered at about four or five pesos to the dollar. That’s quite a spread between the official and the illegal rate of exchange.

It’s not really important anyway because most of the businesses that deal exclusively with foreigners also deal exclusively in dollars. If you are a non-socialist tourist visiting Cuba, you must buy U.S. dollars to spend there. It is one of the ways Castro has contrived to acquire some of those all-important dollars in spite of U.S. restrictions.

This system is complicated but essentially results in two separate financial structures, and the Capitalists are penalized with much higher prices. But everything is still cheap. At the Cuban rate of exchange, it would be ridiculously so. A cup of coffee — 10 cents, line forms on the left, limit two per customer.

Tourists? Yes, the hotel is full of tourists – East Germans, Poles, Yugoslavs, Hungarians, a few Swedes, a busload of French and of course the Russians. I was surprised to see that there were so many tourists from behind the Iron Curtain. Russian tourists look the same as tourists everywhere, with cameras dangling around sunburned necks. They even get special Socialist Bloc money. It is like some kind of exclusive club. Sorry members only.

I met some Polish kids who were traveling all over South America climbing mountains. One told me he had never worked a day in his life and that his father was a wealthy architect. What gives here?

I was beginning to think that all those “liberty” stories about people risking their lives to escape oppression were some kind of Hollywood creation. These people just wanted to escape to the bar or the pool deck while I had to work.

I’ve taken this trip to search out some answers to questions that have been growing inside me for years. The search for answers is leading me instead to new questions. I only have a week to attempt a study that demands much more time, but at least I am here looking.

About “that distinct lack of awareness that almost proved fatal,” actually it was a lack of common sense that almost gave me the chance to check out Cuban health-care facilities from inside.

I should have been taking a siesta in the heat of the day to make up for lost sleep. Instead I launched out into the midday sun, camera bag packed and my intensity level fully charged. The street curved out of sight to the left. I was certain that it was clear as I stepped off the curb into the side of a speeding van. The padded camera bag absorbed the shock saving me and the cameras. My favorite Campagnolo T-shirt is now ripped across the stomach and my left wrist is slightly bruised. I was slapped awake by a flying metal fist.

I waved to the driver and shouted to the passengers that I was OK. I understand that anyone injured while staying in Cuba is granted the same free medical attention given to any citizen, but that’s no reason to take advantage of someone’s hospitality.