Riding the buses in Havana, or in any other city for that matter, is one of the best ways to become familiar with the layout and the people, especially in a foreign country. 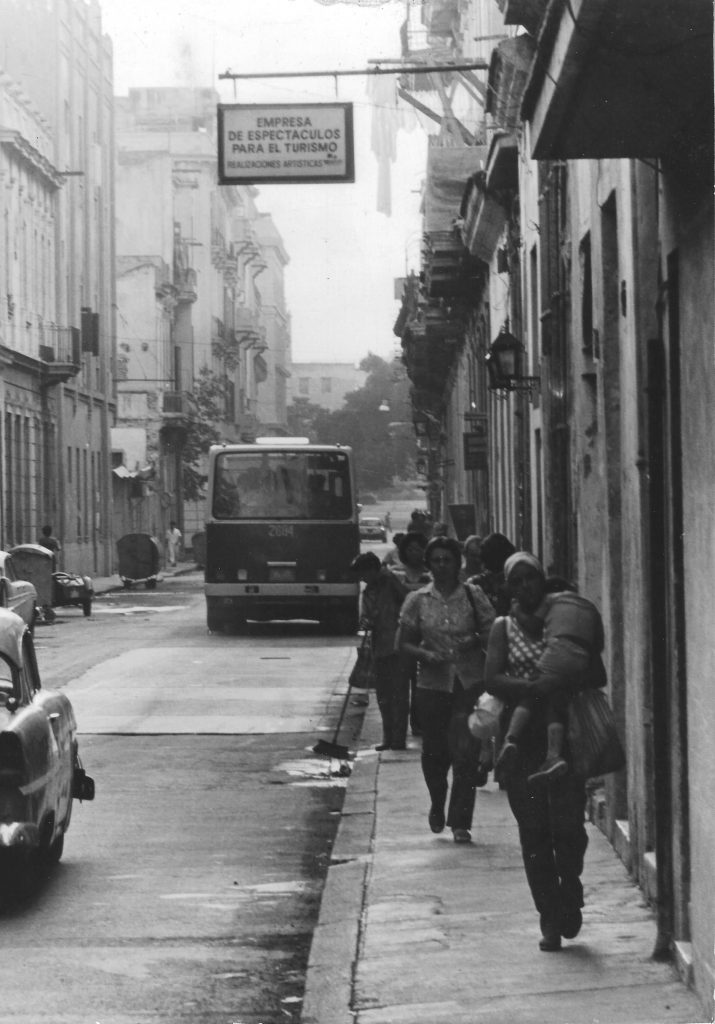 Red, yellow, fast and often very crowded, Havana’s buses cruise their routes at regular intervals and can be relied upon to give more than the nickel fare’s worth of education. This time, among people returning from a day at the beaches east of the city, there were three young girls. Showing typical summer in the city suntans cooked in a day at the beach, they were giggling and acting capricious.

This could be any American city except, as the trip wore on and the initial mood of frivolity settled into resignation, one of the girls drew out a magazine to pass the time. It was Sputnik of course, a Soviet publication comparable to Reader’s Digest but slightly more topical and a little less geriatric.

As I stepped off the bus on Avenidad Calzada, that subtle pique became a jarring realization as I caught sight of a typical Havana newsstand. Soviet magazines of all varieties displayed images of Russia and Vida Checoslovaca – Life in another wrapper. Of course, the images glorify an idealized vision – propaganda no different than similar visions of American life served up at home. I can’t help but wonder why the magazines must travel half way around the world to speak to people just 90 miles away from the U.S.

Music cuts through trade barriers. Today, I heard Cindi Lauper’s voice and Falco’s Rock Me Amadeus echoing off the old stone walls of the houses. Goodbye, Yellow Brick Road faded out as a tango leaped in.

I’ve been in Havana four days now, and it would be easy to get homesick if it weren’t for Cuban TV. Why, they even have a channel here in English designed strictly for tourists. With the abundance of American films shown every day, subtitled in Spanish, there should be no problem overcoming any twinges of desire to plant my feet firmly on the shores of Miami beach or New York City again.

Providing a vast cultural export, Americans need never fear for lack of influence, even in the most remote areas of the world. Actually, images of American life are our best means of convincing those less fortunate that the American way is superior to anything the Second or Third World has to offer. As citizens of the U.S., we can be sure that our highest national interests are best served by those motivated, talented craftsmen who fashion the films we and the rest of the world have come to know and love as American.

It’s obvious that actor-directors like Sylvester Stallone set a standard beyond the grasp of the typical Third World filmmaker. Films as highly revered as the Rocky and Rambo series will probably never be available here in Cuba, but that doesn’t stop these people from finding other American works that are almost as good.

Why just this week alone I’ve could see an incredibly wide variety of Hollywood adventures. And tonight’s feature tops them all. It’s about a psychopathic killer who is living in the attic of a sorority house on the campus of an American university. He is killing the sorority sisters one by one and wrapping them in plastic bags. He keeps them collected in his attic abode and makes funny phone calls to the terrified girls downstairs.

While last night’s film was not quite as good, I still managed to stick with it through the part where the drug dealer in Los Angeles kicked his girlfriend and little boy out just before their home was blown up by his boss who wanted the dealer to come up with $50,000 overnight or else. The best part of that epic was the moment when the drug dealer went to his boss’s house and killed the bodyguard and then killed the boss himself right in front of his wife who was eating breakfast.

If it weren’t for this special station designed for homesick tourists like myself, I might be tempted to watch those other channels that feature Cuban films and propaganda stuff. I tried to watch one of those films the other night. It was supposedly about some CIA funded mercenary bandits operating in the Escambray mountains after the revolution had taken place. It was so farfetched that they even tried to show the U.S. Navy helping these guys who were trying to overthrow Castro.

I had to laugh thinking about how gullible these people must be to believe that kind of stuff. One night of that was enough. Sorry, I can’t waste any more time writing now. I’ve got to get back to the show. The sorority house mom just went into the attic looking for the cat and the killer got her. He yanked her up through the trapdoor by the throat with a rope. He’s going to wrap her up in plastic like the other ones. But, I know they’ll catch him in the end even if it takes six sequels. That’s the best part about American films.